Theodore Tugboat is the name of a television show created by Andrew Cochran. The series started of as Andrew Cochran was telling how Halifax Harbour works to his three year old son. Cochran and his production company, Cochran Entertainment, went on to lead the development of the series with the CBC in Canada, starting in 1989. Production commenced in 1992 with the first broadcasts aired on CBC in 1993. The series has spawned up to 5 seasons until the show came to an end in 2001. Altogether, Andrew's production crew had made a total of 130 episodes.

Theodore tugboat and his friends revolve around the shores and docks in The Big Harbour. The show mainly focuses on Theodore, a kind and helpful, yet cheeky, and fussy tugboat whom is a harbor tug that wears a red baseball cap. Theodore helps also with his other tugboats friends solve their own problems. Theodore and his friends work for The Great Ocean Tug and Salvage Company whom The Dispatcher is the manager in charge.

The history of Theodore Tugboat starts of back in the waterfront of Halifax in August of 1989. Andrew Cochran, a former TV journalist who had run Canada AM and CTV National News before moving home to Halifax to create a successful CBC children’s series called Blizzard Island, was walking along the waterfront one day when he noticed a container ship and two tugs in the harbor. After seeing that, he started telling storys of tugboats to his two year old son. In the next two years CBC gave the green light and so design work commenced in December of 1991 and thus made 20 episodes for the first season starting on August 24th, 1992.

English is by no means the only language in which the series is broadcast: 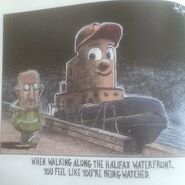 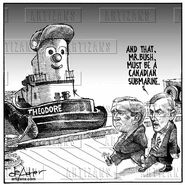 Add a photo to this gallery
Retrieved from "https://theodoretugboat.fandom.com/wiki/Theodore_Tugboat_(series)?oldid=64337"
Community content is available under CC-BY-SA unless otherwise noted.