Theodore Too and the Too-long Nap is a book published by Nimbus Publishing. Written by Michelle Mulder. Published 2006-present and illustrated by Yolanda Poplawska.

It is Theodore Too's birthday and there was a special guest for Theodore's birthday, a cruise ship named Gerta who has come all the way from Germany. Theodore, Lucy, and Guy try to wake her up just not to miss the party. 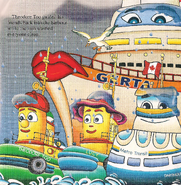 Gerta sleeping
Add a photo to this gallery
Retrieved from "https://theodoretugboat.fandom.com/wiki/Theodore_Too_and_the_Too-long_Nap?oldid=59931"
Community content is available under CC-BY-SA unless otherwise noted.