< Owan
Back to page
View source

Owan is a fictional Oil rig created by Andrew Cochran.

Owan's model was reused to Tex's, the legs of Oil rig was eight (but Tex have six side), model of Tex was repainted to red. this head of Tex change to front of Oil rig set and crane was stuck in Owan's head.

After Owan's model was finished make first appeared in Bumper Buddies, the helicopter from Owan was make by ERTL Company, during the Sigrid loaded the cargo to Owan was pulled by crew production on top of sets. Owan did have his spotlights on his derrick was turn on by crews from set. Owan do have underwater wheels on under platform if Owan was too heavy to pull on it. The eye merchanism of model was not moving, because Owan had the lots of wires inside of set.

rear of Owan from background in Big Harbour Fools Day

Owan turning on his lights

Owan turns off his lights

After Theodore Tugboat's production had ended, Owan's model, alongside Sigrid's, were on display at The Maritime Museum of The Atlantic. But in 2002 Owan's display had collapsed, the models have been in storage ever since. 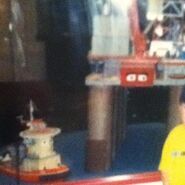 During the background scene. Owan also has small-scale model for background and it's was five feet in height and it's also built out of fiberglass and perspex.

Owan's small-scale was remains is unknown, although it is likely that the model is currently in storage from somewhere nearly Maritime Museum of the Atlantic.